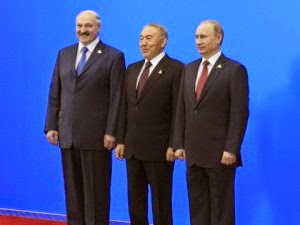 Speaking after the signing ceremony, Nazarbaev said allegations that the EES is nothing more than a re-establishment of the Soviet Union are not true, adding that the new bloc is purely economic and will play a key role in the world’s economic development.
Nazarbaev said the new pact is based on consensus.
“The agreement is well-balanced and thorough, taking into accounts the interests of all its members,” he said.
He voiced hope that the new alliance “will become a powerful incentive for modernizing our economies and helping make them global leaders.”
For his part, Putin said that key global economies have expressed interest in the EES, which he described as the major economic formation in the post-Soviet space, serving a market of 170 million people.
Putin said the EES takes cooperation to a “new level,” while respecting the sovereignty of member states.
Meanwhile, Belarusian President Alyaksandr Lukashenka — before signing the document — said that he was not fully happy with the deal but praised it as a mutually acceptable compromise.
Lukashenka added that the path toward the treaty was long and difficult, noting that some countries, such as Ukraine, had left the working group, while others, such as Armenia and Kyrgyzstan, have expressed interest in joining the bloc.
He said the EES will gradually turn into a foundation for political, military, and humanitarian cooperation.
Armenian President Serzh Sarkisian and Kyrgyz President Almazbek Atambaev attended the gathering in Astana on May 29 to discuss future membership.
Sarkisian said his nation will be ready to join the bloc as early as next month after completing final preparations.
After the ceremony, Putin and Atambaev signed a road map for Kyrgyzstan to join a Customs Union of Russia, Kazakhstan, and Belarus — a precursor to Kyrgyzstan joining the EES.
Lukashenka said he believes that Ukraine will join the EES “sooner or later.”
Russia tried to interest Ukraine in joining the Customs Union rather than sign an Association Agreement with the European Union. But Ukraine’s then pro-Russia president, Viktor Yanukovych, who spurned the deal with the EU in favor of closer ties with Moscow, was chased from power in February following months of protests.
Putin and Nazarbaev also met separately and signed a memorandum on the construction of Kazakhstan’s first nuclear power plant.