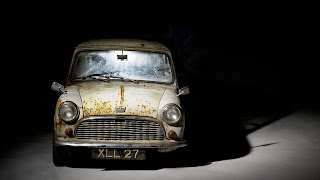 The Oldest Unrestored Mini In The World Heads To Auction

It might just look like another old Mini in need of some love, but this particular tiny Brit is actually the eighth of the million+ cars built over the models 41 years in production.
The early production date of this 1959 Austin Mini Se7en De Luxe Saloon is why instead of sitting under a tarp in someone's backyard this car will be crossing the auction block at a Bonhams' collector car auction next Monday. Pre auction estimates of $19,000-$24,000 for a car in need of significant rust repair that hasn't run in several years can also be attributed to the fact this is the oldest unrestored Mini in the world. Three of the seven Minis believed to be built before this car are still known to exist, but all of them have been restored.
If it sells it will be up to the new owner to decide what the best course of action to take with this historically important Mini is. Although we are normally all for preserving survivor cars, we'd rather drive and enjoy our recently restored example of the eighth oldest Mini than look at the oldest unrestored Mini rotting in our garage.
Hat tip to McNewbie1!
[via The Sun]
Nota:Não é costume da CACINE publicar noticias destas, mas um membro da guarnição, super entusiasta e saudoso destes carros, solicitou com muita insistência e...nós cedemos
Publicada por Manel à(s) segunda-feira, maio 07, 2012