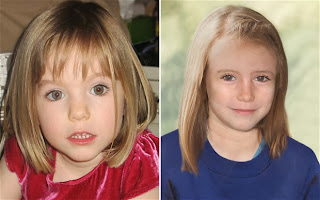 Detectives conducting a review of the case have produced a list of people who they say are of “interest to the inquiry” and should be questioned.
Detective Chief Superintendent Hamish Campbell, the head of Scotland Yard’s Homicide and Serious Crime Command, said the Portuguese authorities should now reopen its investigation into Madeleine’s disappearance six years ago.
He said the Met’s review, dubbed Operation Grange, had identified "both investigative and forensic opportunities" and said the people of interest could be explored further, if only to be eliminated.
Kate and Gerry McCann expressed their gratitude to the British police and said they were encouraged by the developments.

Their spokesman Clarence Mitchell said: "Kate and Gerry remain very, very pleased with the work that Scotland Yard are doing and have been encouraged by Operation Grange from the day it began.