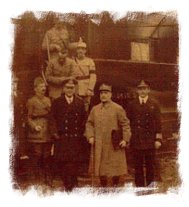 Veterans Day, which Americans celebrate on November 11, was originally called Armistice Day, to commemorate the cessation of fighting in the Great War of 1914-1918. In the United States, the idea that this was "the war to end all wars," (a phrase coined by H.G. Wells in a pamphlet of that name and echoed by Woodrow Wilson with equal earnestness) was challenged by an outspoken and persecuted peace movement, including poor farmers and black Americans conscripted at disproportionate rates.

Most Americans may have accepted the justification at the war's start, but by the war's end, with a U.S. body count of 117,000 and double that in serious injuries (and 37 million casualties overall on both sides, 16 million deaths and 21 million wounded), the signing of the Armistice by Allies and Germans at the 11th hour of the 11th day of the 11th month of 1918 was met with celebration that it might mean a true "end of war." In 1919, a year later, Armistice Day was established to celebrate "the resumption by the people of the United States of peaceful relations with other nations, which we hope may never again be severed."

After World War II and the Korean War, and the start of a heated Cold War, it was clear to the government that an armistice and peace were not in sync with the times. In 1954, Congress changed the name of the November 11 holiday to Veterans Day, exchanging peace for celebrating patriotic valor, and the ultimate sacrifice of life, limb and health in battling for one's country.

Today's veterans are survivors of more than a half century of American wars--World War II, Vietnam, Panama, Grenada, the 1991 Gulf War (which has never been officially declared over), and the wars in Afghanistan and Iraq.